In order to fully enter into the meaning of the term centripetal acceleration, the first thing to do is determine its etymological origin. In this regard we can highlight the following:
-Acceleration derives from Latin, specifically from “acceleratio”, which is the action consisting of increasing speed. It is the result of the sum of three components: the prefix “ad-“, which can be translated as “towards”; the adjective “celer”, which is synonymous with “fast”; and the suffix “-cion”, which indicates “action and effect”.
-Centripetal, on the other hand, comes from the Latin also, from “centripetus”.

Acceleration is the process and result of accelerating – making speed increase. Acceleration is also the magnitude that reflects the increase in speed in a time unit.

Centripetal is that which draws towards or moves towards the center. The idea of ​​center, on the other hand, can be used with reference to the point that is in the middle of something, equidistant from the edges or limits.

It is important to note that when an object travels in a curvilinear path, its speed always undergoes changes in direction, even when the speed is constant. This is because the direction, beyond speed, is never constant.

In other words: a body can make a uniform circular motion, maintaining a constant speed while making a circular path. However, despite the constant speed, its speed is not constant because it is a magnitude that is tangent to the path, and the path changes its direction repeatedly while making the circle.

Centripetal acceleration, therefore, does not change the modulus of velocity, but it does alter its direction, making it possible to develop the trajectory.

When we talk about centripetal acceleration, another type of acceleration inevitably comes to mind, the centrifuge. This new term is used to refer to the acceleration that the bodies acquire as a consequence of what is known as the effect of centrifugal force. This force is defined as a fictitious type that occurs when the displacement of any object in a reference system is described, which is in rotation.

From the latter we can highlight the following data of interest:
-It is totally radial, perpendicular to what is the movement of the body.
-It is identified by the fact that it is directed outwards.
-It can be decomposed into two: the component in what is the radial direction and the component in the north-south direction.
-It increases as the centrifugal force mentioned is doing the same. 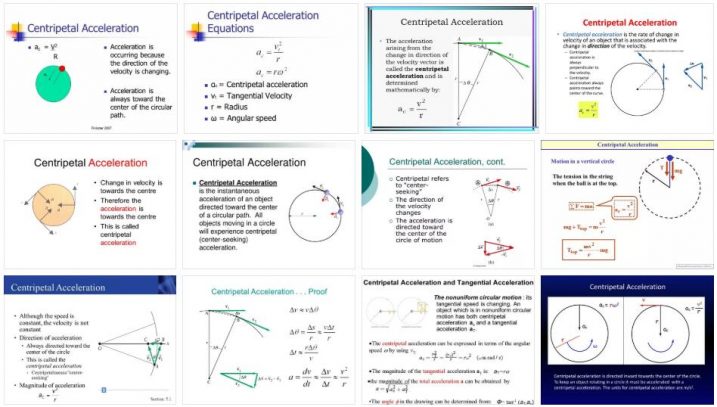