Gas fire or gas edema is an illness that is life-threatening and whose previous level of danger has remained up to the present day of modern medicine.

What is a gas fire?

The infectious-toxic disease of gas fire, which is characterized by a sudden occurrence and a short, usually fatal course, is also referred to in medical jargon as gas edema, gas gangrene or gas phlegmon and other terms.

Gas fire (gas edema) is an infectious disease because it can be triggered by pathogenic microorganisms that have been dragged around. The pathogens in gas fire (gas edema) predominantly affect the so-called soft parts of the organism, which leads to very specific symptoms, which in the majority of cases lead to the death of the sick person.

The causes of gas fire (gas edema) lie in the penetration of pathogenic bacteria of the clostridial strains. These bacteria can multiply in the absence of air and enter the organism through unnatural body orifices and damaged tissue areas.

As a rule, wounds caused by injuries with heavily soiled wound areas are predestined places. The clostridia that lead to gas burn (gas edema) are not fundamentally disease-causing. However, unfavorable health conditions of the infected patient lead to a forced multiplication of these spores.

A weakened immune system, further major injuries, diseases of the metabolic system or carcinomas can lead to a negative course of the disease in a gas fire (gas edema).

Gas fire is an extremely life-threatening disease that spreads very quickly. Starting from the infected local wound, the surrounding tissue dies very quickly and, if left untreated, leads to severe sepsis. At the beginning there are local symptoms. About two days after infection with the bacterium Clostridium perfringens, necrosis of the tissue around the wound begins.

At first the wound pain increases sharply. At the same time, the region around the wound swells and forms what is known as wound edema. There is a brownish-yellow to bluish-black discoloration in the affected area. A cloudy, brown secretion oozes out of the wound, which is very bad-smelling. A noticeable crackling sound when touching the diseased area is typical.

This crackling, also known as crepitation, is caused by strong gas formation due to the decomposition of the dead tissue. Furthermore, the bacterial toxins also break down the muscles in the affected area. After the infection initially spreads locally, the bacteria enter the bloodstream and cause life-threatening sepsis.

Sepsis manifests itself as a drastic drop in blood pressure and an enormous increase in heart rate (palpitations). The bacterial toxins initially lead to increased blood clotting in small blood vessels with the formation of thrombi. After the coagulation factors are used up quickly, internal bleeding then occurs, which can lead to fatal multiple organ failure.

The course of the gas burn disease (gas edema) with the typical symptoms can also provide clear indications for an exact diagnosis. After the spores have penetrated the organism, after the injury has taken place, it takes 5 to 48 hours until severe signs of inflammation appear in the wound.

Massive redness, swelling, unbearable pain and a hot wound environment urge those affected by gas fire to the doctor. When feeling the initially locally limited wound area, the doctor hears a crackling noise in the case of gas edema. Due to the formation of CO2 and the secretion of wound water typical of gas burns, gas burns can be clearly identified.

The patients with gas edema become increasingly weaker, develop a fever and often blood poisoning. In the final stage of a gas fire, the loss of function of the kidneys and the failure of almost all organs lead to a lethal outcome. The diagnosis of gas edema is mainly limited to palpation and visual diagnosis as well as microbiological examinations and radiological possibilities.

Gas edema can be life-threatening for the patient if left untreated. In most cases, this leads to severe wound pain. The wound is swollen and has turned a brown color. There is also a bad smell on the wound, which can also exude a liquid.

The affected area often also creates pain at rest, which can lead to sleep problems. Restrictions in movement are also caused by the pain. Furthermore, the wound can become inflamed due to the gas edema and blood poisoning can occur, which can lead to death. It is not uncommon for fever and vomiting to occur. The patient’s quality of life is significantly reduced by the gas edema.

As a rule, surgical procedures and medication are used in treatment. This often goes without complications if it is initiated early. In most cases this always results in a positive course of the disease. Life expectancy is only reduced if treatment does not start immediately or if there is poor hygiene at the wound.

A doctor should be consulted as soon as there are unusual changes in an existing wound on the body. If the wound does not heal visibly within a few days, a medical check-up should be initiated. If there is reddening of the skin, pain or swelling of the wound, there is cause for concern.

A doctor should clarify the symptoms as soon as the existing symptoms increase in intensity or spread. Since the gas fire is a life-threatening condition, it is necessary that timely medical care is provided.

If an unpleasant odor is noticed in the wound or a discharge with a brownish discoloration occurs, a doctor is required. If noises are made when touching the wound, it is advisable to consult a doctor. Fatigue, general weakness or a high body temperature are considered unusual and should be examined and treated by a doctor.

If you feel sick, vomit or feel generally ill, see a doctor. If the existing performance decreases continuously, the need for sleep increases and everyday tasks can no longer be carried out as usual, a visit to the doctor is necessary. Treatment is also essential as soon as dysfunction occurs or the state of health gradually deteriorates.

Although the frequency of mortality from gas fires is currently alarmingly high, therapeutic help can in principle be provided. This is based on a combination of one or more surgical interventions to remove the affected tissue and the administration of strong antibiotic drugs.

The aim of this measure is to specifically combat the pathogens by stopping their ability to divide. In the field of drug therapy, mainly highly effective and high-dose broad spectrum antibiotics that were developed for anaerobically living bacteria are used.

In the case of advanced symptoms, the therapy is many times more difficult. Most of those affected require extensive surgery that can lead to the loss of organs and extremities. A therapeutic procedure known as hyperbaric oxygenation in the case of gas fire is known from numerous other diseases as oxygen therapy.

The patients with gas edema are treated in hyperbaric chambers. In order to be able to keep the seriously ill with gas fire alive and to be able to stabilize their condition as far as possible, extensive intensive therapeutic measures are necessary. To increase the chances of a non-fatal outcome in gas edema, it is imperative to initiate treatment for gas burn as early as possible.

Gas fire is a serious condition that is fatal in 30 to 50 percent of cases. The lethality is even higher in the case of endogenous gas fires, which predominantly affect immunocompromised people. The prognosis is better if the gas edema occurs on the extremities.

A trunk disease is fatal in around 50 to 70 percent of cases. If the disease is recognized early and treated effectively, a full recovery is possible. Often the affected limbs have to be amputated. This is accompanied by physical and emotional complications.

Even with a positive outcome, severe physical limitations almost always remain after a gas fire. In addition to scarring and other skin changes, there are sensations, paralysis or phantom pain, which limit well-being. If the gas fire turns out to be positive, life expectancy is not necessarily restricted.

Severe edema of the torso or head increases the risk of infections and other life-threatening complications. Basically, gas fire offers a relatively poor prognosis. With early diagnosis and successful therapy, partial cure is possible. Most of those affected suffer from the effects of the necrotic infection on a permanent basis.

To prevent gas fires, simple tips are extremely helpful. In the event of injuries and severe soiling of wounds, they must be thoroughly cleaned and disinfected. After these activities, the wound areas involved must be bandaged in a sterile manner. The wound healing in gas gangrene should be a steady control of the healing process. If the wounds are poorly or inadequately cleaned, preventive antibiotic medication against gas edema can be useful.

In the event of a gas fire, the person affected has only limited options for follow-up care. The person affected should primarily have medical treatment for the fire in order to prevent further complications and skin discomfort. The earlier treatment is started, the better the further course of the disease.

In general, the harmful source of the gas fire should be stopped immediately so as not to further damage the skin. In many cases, however, pathogens also have to be stopped if they are responsible for the gas fire. Those affected usually receive antibiotics and other medication. Regular use of these medications should be observed, and possible side effects and interactions should be clarified in advance.

Antibiotics must not be taken together with alcoholic beverages, otherwise their effect will be lessened by the alcohol. In the event of a gas fire, those affected often also need the help and support of friends and family in order to avoid psychological complaints. Loving and intensive care is often necessary. In serious cases, however, the gas fire can also lead to a reduced life expectancy for the person affected.

If a gas burn is detected, an open wound treatment is usually carried out immediately. The person concerned is then advised to carefully care for the wound in order to avoid further infection or to prevent any clostridia from spreading.

If an operation is necessary, the affected person should be rested. The most important self-help measure is to cure the disease well. In addition, the instructions regarding personal hygiene and wound care must be observed. Sometimes a suitable diet can support the healing process and reduce the discomfort. The doctor must check the wound regularly and adjust the medication if necessary.

In many cases, antibiotics are prescribed that must be taken by the sick person strictly according to the doctor’s instructions. If side effects become noticeable, the doctor must be informed about them. After consulting the doctor, natural preparations may be used to reduce pain under certain circumstances.

If no further complications occur, a gas fire usually heals after a few days to weeks and does not require any further medical treatment. Adequate wound care can prevent the development of further gas edema. Should the infection occur again, the attending physician must be consulted immediately. 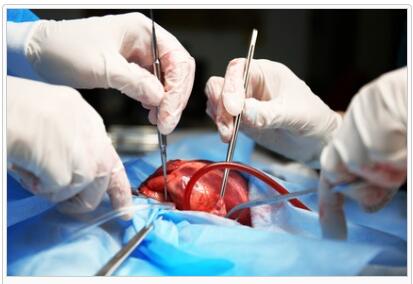