LGBT is the acronym that identifies the words lesbian, gay, bisexual and transgender, which is also a movement that was shaped by the struggle for equal rights for these minority sexual communities. 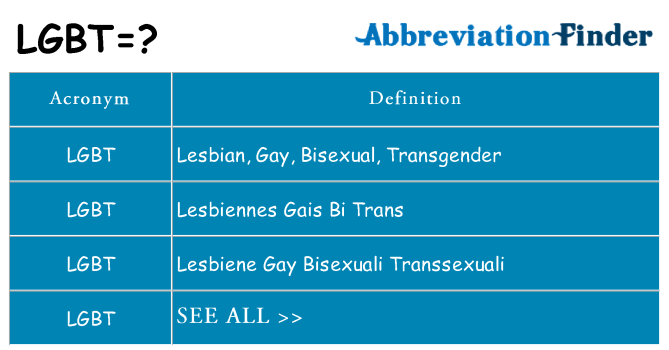 In the 1950s there were no words that called non-heterosexual people, so the term “third sex” was used.

Later the word homosexual began to be used to refer to people who like others of the same sex and, years later, the gay word of Anglo-Saxon origin appeared, whose use became popular.

This situation already represented a problem, even because these new terms in the vocabulary were used in a derogatory and non-integrative manner as conservative family customs were strengthened.

On June 28, 1969, in a bar in New York (United States) called Stonewall , there was an event that marked history and promoted the movements of sexual diversity.

From that moment, a set of protests began that extended for days. All the people who were in Stonewall opposed the police, which had the order to raid, in order to claim equal rights and respect.

At that time, non-heterosexual people were harshly criticized, their acts were considered illegal, they were excluded in various social groups and, in addition, they suffered police abuse.

For this reason, every June 28 the International LGBT Pride Day is commemorated internationally and the use of acronyms became popular thereafter to identify this community.

However, with the passing of the years and the new typifications about the sexual tendencies of individuals, the acronym LGBT has been modified by LGBTTTI, because it is more inclusive.

Its acronym includes, names and represents both lesbian, gay, bisexual and transgender, as well as transvestite, transsexual and intersexual.

There are different natures within the minorities that make up the LGBT or LGBTTTI movement. These differences lie in the definition of sexual orientation or sexual identity with gender identity. Below the basic differences:

The LGBT movement is called social and political activities and initiatives that fight for tolerance and against discrimination and homophobic violence.

This movement seeks to recognize and match the rights of the people who represent that movement.

It should be noted that although the acronym LGBT or LGBTTI does not cover all small communities of various sexualities, they are still represented and accept their members.

Thanks to these movements and tolerance and recognition, there are already several countries that have modified their legal frameworks in order to include, preserve and respect the right and duties that all human beings have.

The gay march is one of the most important, representative and notorious public events of the International LGBT Pride Day, which invite tolerance and equality.

These marches are characterized by being very colorful thanks to the costumes and makeup that all participants use that day. It is a day in which its participants expose their orientations and identities with pride.

During these marches the most recognized gay pride symbols , the flag with the colors of the rainbow and the pink triangles are exposed . Both symbols seek to represent the social and political demands with which these minorities identify.

For example, the Federal District of Mexico City, capital of Mexico (CDMX), has been declared a friendly city for the LGBT or LGBTTTI community.